The murder case which inspired U.S. Supreme Court Justice Antonin Scalia to suggest that such a crime made it “hard to argue against lethal injection,” and which the North Carolina Republican Party used to accuse a Democrat of being soft on crime in 2010 has ended with the DNA exoneration of two men and a district attorney’s admission that “the state does not have a case.”

Until recently, the case of Henry Lee McCollum and Leon Brown out of Robeson County has literally been a poster child for North Carolina’s death penalty. Below is a flyer used by the North Carolina Republican Party to deter public support for Democrat Hugh Holliman in 2010 because he supported the Racial Justice Act, despite the fact that he was the father of a girl who was murdered and whose killer was executed in North Carolina. McCollum is pictured on the right. 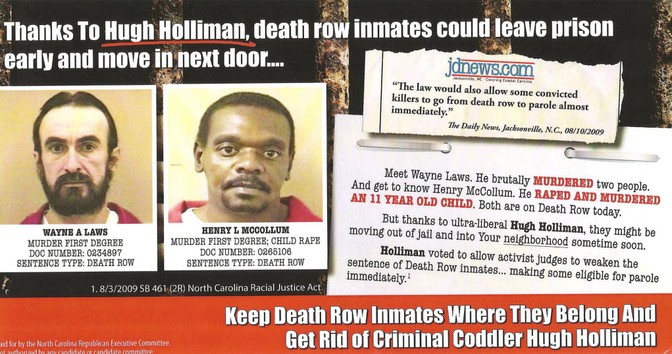 Yet the case has proven deeply troubled – not only by exonerating forensic evidence, but by the withholding of exculpatory evidence by the state.

At the conclusion of a post-conviction hearing yesterday, McCollum and Brown were freed from death row and a life sentence respectively following DNA testing that revealed another perpetrator already serving a prison sentence for rape was likely the actual murderer of the 11-year-old victim in the case. See a detailed New York Times article about the DNA revelations here.

But it wasn’t just DNA evidence that suggested the pair’s convictions should be thrown out. According to McCollum’s attorneys, the “use of false testimony, and the suppression of material and favorable evidence” were enough on their own to warrant new trials.

In a memorandum that accompanied McCollum’s Motion for Relief, McCollum’s lawyers detailed the following false testimony and suppressed evidence in the case:

“When those [DNA] testing results are then viewed in conjunction with the other facts and circumstances surrounding Mr. Artis, the lack of evidence of Mr. McCollum’s and Mr. Brown’s guilt, and the critical evidence previously undisclosed by law enforcement, they eviscerate the reliability and justice of their convictions and sentence.”

Superior Court Judge Douglas B. Sasser granted the motion, vacating the men’s convictions and ordering their release. District Attorney Johnson Britt said he will not pursue a retrial in either case. Nevertheless, Joe Freeman Britt (unrelated to Johnson Britt) maintains that there was no Brady violation in the case and that he is “suspicious of DNA claims of innocence” generally.

Whether police ran the fingerprint comparison and got results they didn’t like, or whether they failed to run the comparison at all, we don’t know. According to the memorandum in support of the motion for relief, defense counsel tried as recently as March of this year to get the State Crime Lab to answer a motion for discovery for all materials related to the case in the lab’s possession. Defense counsel have been trying, unsuccessfully, to get this information since 1995.

What we do know is that even at the time of McCollum and Brown’s trial, police suspected that they might have the wrong guys. They had an alternate suspect who lived across the street from where the crime took place, who killed someone else a month after the crime and who we now know is likely the real killer, and they never disclosed it to defense counsel.

It’s not just DNA testing that could have prevented this great miscarriage of justice. If the state had not glossed over the defendants’ problematic confessions, led the jury to do the same by providing false testimony, and hid the fact that another party could have been responsible, McCollum and Brown might never have been wrongly convicted in the first place.