This week in the news, a few prosecutors were seen holding their hats in their hands while they answered to judges and the public for committing misconduct. But in some cases, they just couldn’t resist maintaining that they were in the right. Let’s take a look at the highlights from the past few days as well as court decisions from earlier this month to see what these prosecutors have to teach us about saying sorry.

Admit your mistakes: The North Coast Journal reports that a lawyer formally suspended from practicing law is running for District Attorney of Humboldt County, California:

“[Candidate Allen] Dollison identified the largest criticism of his campaign as his sanctioning by the California State Bar in 2000, when he stipulated to 16 counts of misconduct in four cases and saw his law license suspended for 60 days…

Dollison later resigned his post with the Humboldt County District Attorney’s Office under unusual circumstances, after a mistrial was declared in a case he was handling and he was accused of lying to a judge… [Judge] Watson noted that Dollison’s answers to questions under oath about his handling of the case — specifically his failure to disclose an interview between Adams and police — were “a bit convoluted, to perhaps say the least,” and that what he’d told the trial court “didn’t appear to even pass muster on making sense at the time and seemed to be — my terms — a misstatement, a cover up, of some sort.” 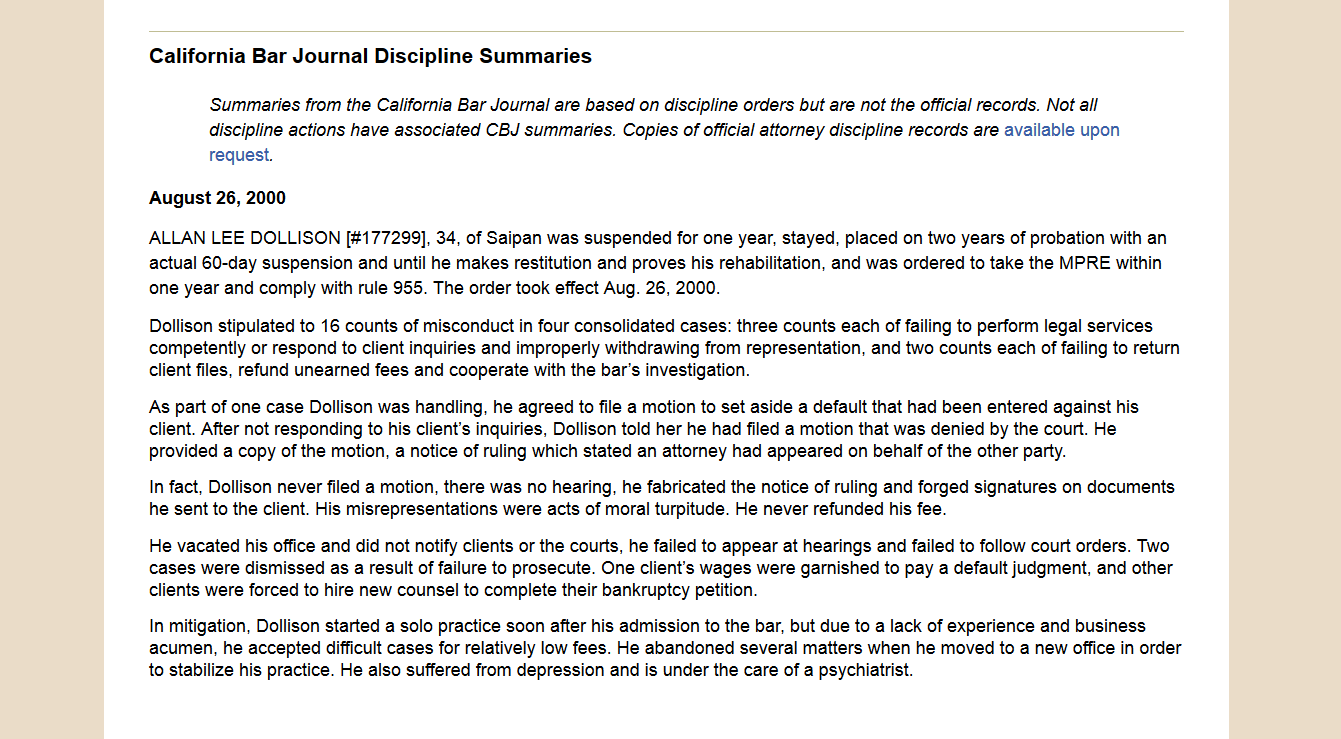 “It was only a belt…” Minimize your actions: Kanawha County Prosecutor Mark Plants prosecutor was forced to defend himself in front of the West Virginia Supreme Court after the state bar’s Office of Disciplinary Counsel recommended he be suspended for hitting his son with a belt. More from the MetroNews:

“Plants was charged with domestic battery for hitting his 11-year-old son with a belt 10 times back in February and leaving a mark. Then in March he was charged for violating a domestic protective order. Plants argued it was in his right to discipline his child and he did so without the intent to harm.

Two weeks ago, Kanawha County Circuit Judge Duke Bloom ordered that all cases involving children and violence, in the city of Charleston, be handled by a special prosecutorial team. Retired Kanawha County Assistant Prosecutor Don Morris is heading up that 4-person team.”

Know when to walk away: The federal Louisiana prosecutors who were outed for making undercover online comments about their cases on Nola.com cut a deal with the Eastern District of Louisiana earlier this month to resign from federal court.

‘[C]ourt officials said the only information that would be disclosed is contained in the one-page orders that say each was “permitted to resign in lieu of discipline in the Eastern District of Louisiana,”‘ says Nola.com. ‘Perricone and Mann’s names will be “permanently stricken from the roster of attorneys licensed to practice” in the federal court that handles federal cases from the 13-parish area. (READ: Perricone order and Mann order.)”‘

They’d already resigned from the U.S. Attorney’s office – were Mann and Perricone really going to return to that courthouse to work? They are still licensed to practice in state court and, though further discipline could technically come from the Louisiana Bar Association, we won’t hold our breath.

‘Kansas’ justices cited “clear and convincing evidence” of professional misconduct, finding Kline violated 11 rules governing the professional conduct of attorneys during his tenure as the state’s highest law enforcement officer and while he served as Johnson County district attorney.’