Morton: The Road to Accountability in Infamous Case of Wrongful Conviction

“The pursuit of justice shouldn’t end with an innocent person’s release from prison.”      – The Austin American-Statesman, Editorial on the Michael Morton case, 2012

In 1988, husband and father Michael Morton was found guilty of murder in the death of his wife, Christine. His defense attorney was convinced that Morton was innocent and helped initiate Morton’s 25 year struggle to reveal the truth. By the time Morton was freed in 2011, it was clear that evidence existed at the time of his trial which pointed to a different killer. That killer went on to murder another woman in the same year Morton was convicted. Now the former District Attorney who tried the case, Ken Anderson, faces disciplinary proceedings for allegedly hiding the evidence which later helped set Morton free.

When former District Attorney Ken Anderson of Williamson County, Texas gave his word during a deposition in 2011 that he did not withhold exculpatory evidence in Michael Morton’s murder case, his assurances didn’t satisfy the Texas State Bar or the District Court Judge who oversaw Morton’s exoneration.

Both ordered investigations into the matter to determine if Anderson – who is now a sitting District Court Judge – hid evidence that pointed to someone other than Morton as the likely killer of Morton’s wife, Christine Morton, in 1986. This evidence included statements made by Morton’s son, Eric, who was present at the time of the murder and later told his grandmother that a “monster,” rather than his father, had killed his mother. 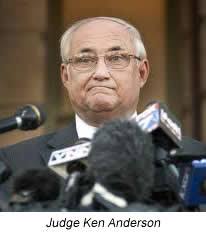 The Texas State Bar’s subsequent 10 month investigation and final report now form the basis of a disciplinary lawsuit against Anderson. The disciplinary proceedings could result in the suspension of Anderson’s law license or even his disbarment if the court rules that he violated the Rules of Professional Conduct.

In an unprecedented action, the Texas Supreme Court adopted District Court Judge Sid Harle’s recommendation to hold a Court of Inquiry into Anderson’s conduct. Testimony in the Court of Inquiry is set to begin on February 4, 2013, and will be made public.

The punishment of prosecutors who commit misconduct by the State Bar is almost as rare as courts of inquiry in Texas. A Texas Tribune article cites an unnamed official at the State Bar who could only think of three prosecutors who had ever been publicly reprimanded in the last 27 years. The Innocence Project recently released a report which found that in a sample of 91 criminal cases where prosecutorial misconduct occurred, not one prosecutor was disciplined by the Texas State Bar.

Michael Morton’s tragic story, so artfully reconstructed by Pamela Colloff in Texas Monthly, has led to urgent responses from state officials;  in part, because the real killer responsible for Christine Morton’s murder also killed Debra Baker two years later – a fact which adds horrifying gravity to the allegations of misconduct. But it remains to be seen what punishment, if any, Anderson may receive through the Court of Inquiry and the State Bar proceedings for his role in Mr. Morton’s prosecution. His lawyers argue that the Texas Bar is hamstrung by the local statue of limitations on professional conduct claims.

Justice Clarence Thomas’s  assurances in Thompson v. Connick that state bars provide adequate mechanisms to hold prosecutors accountable for misconduct have proved elusive in Texas and its neighboring Louisiana, where Thompson v. Connick originated. The actions that the State of Texas is taking against Judge Anderson contrast sharply with the usual inaction of state bars to hold prosecutors accountable for similar misconduct.

Sadly, the efforts to investigate Anderson (rather than the miscarriage of justice which led to them) is proving to be the most extraordinary aspect of the Michael Morton case.