In February, 1997, Ricci Ellsworth went missing from the hotel office where she worked in Memphis, TN. When nobody answered the hotel telephone early one morning, a concerned gentleman checked the bathroom by the office and found the tap running, the  sink broken, the toilet seat ripped off and blood-soaked towels on the floor. There was a lot of blood, and Mrs. Ellsworth was missing.

Hotel patrons who had seen Ms. Ellsworth shortly before her disappearance gave statements to police that they had seen her let a man into the clerk’s office through a locked door.  Others noticed a maroon Honda pull up outside and, later, saw a man put a heavy object wrapped in a comforter in the trunk. When police began to investigate the scene, they suspected Ellsworth’s former boyfriend, Michael Rimmer, may be responsible. Rimmer had a history of violence toward Ellsworth, having previously been jailed for raping her. Rimmer was tried and sentenced to death for Ellsworth’s murder in 1998, though her body was never found.

The case of Michael Rimmer is a complicated one.  Initially, the evidence that the state brought against Rimmer to secure the death penalty against him seemed compelling:  he had allegedly talked to inmates about killing Ellsworth while incarcerated for her rape, he asked his brother for help removing blood from the back of his car the morning after she disappeared, and samples of the blood from the car were later found to be consistent with Ellsworth’s.

But then, Rimmer turned up  evidence that the state never provided about an alternate identification: 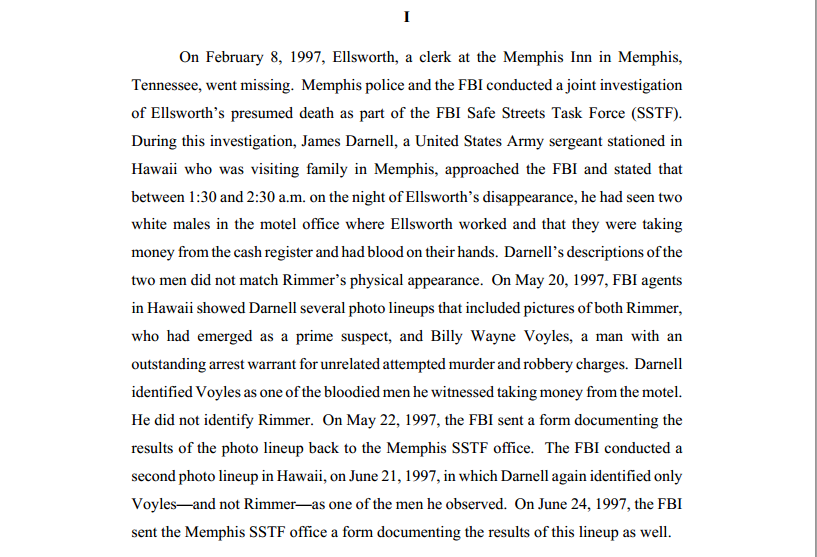 In order to find this information, Rimmer first had to file public records requests with local and federal agencies, and then file a lawsuit against the FBI and Attorney General Eric Holder.

Read the Sixth Circuit opinion in Rimmer’s lawsuit against AG Holder, the FBI and the Department of Justice.

Sgt. Darnell’s identification of a man other than Rimmer certainly throws a wrench in the state’s theory of the case. Indeed, the presence of two men – neither of whom fit the description of Rimmer – taking money from the clerk’s office with blood on their hands at the hour when Ellsworth went missing is impossible to reconcile with the state’s argument at trial.

Using a slightly confusing rationale, the Tennessee District Court Judge James C. Beasley overturned Rimmer’s conviction in October last year on grounds that his attorneys were incompetent in failing to turn up evidence that should have been turned over by the state. Judge Beasley suggests that there was enough evidence available that competent attorneys would have dug deeper to find the things that were being withheld.

However, Judge Beasley does not spare the state in his opinion, finding that prosecutors failed to meet their burden to turn over information about Darnell’s identification to Rimmer’s attorneys under Brady v. Maryland and that Assistant District Attorney General Tom Henderson “purposefully misled counsel with regard to the evidence obtained in the case.” Henderson’s assertions to defense counsel prior to the 1998 trial and a 2004 re-sentencing hearing that the state was unaware of any exculpatory evidence in the case was “blatantly false, inappropriate and ethically unquestionable,” according to Judge Beasley.

It remains to be seen whether the state will retry Michael Rimmer or not.